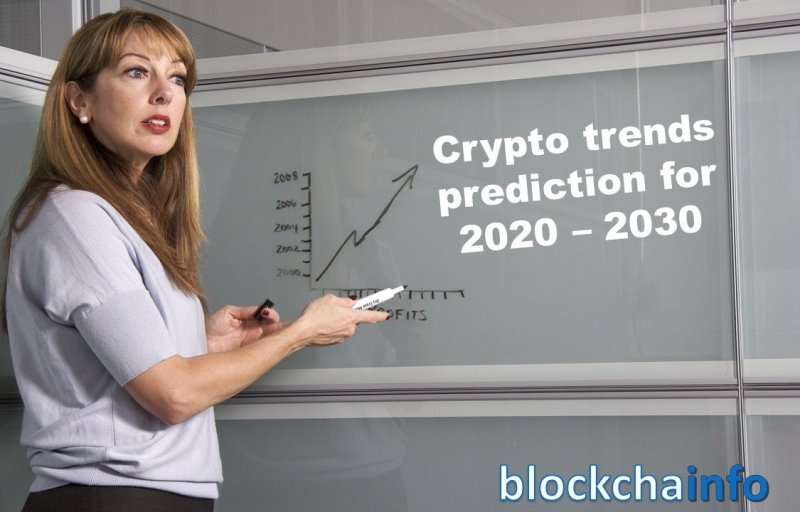 What will be the crypto trend for this decade? Where do we move and what can we expect? Here are some tips on where we can go. One thing we know for sure, it will be a path towards decentralization.

In 2009, the mysterious Satoshi Nakamoto created a cryptographic protocol called Bitcoin. Bitcoin is a peer-to-peer digital currency, which is secured by the SHA256 hash function and built on the Proof-of-Work algorithm, where security is guaranteed by miners.

After that, many new cryptocurrencies appeared also as forks of Bitcoin. Some of them brought new ideas like Ethereum with adding smart contracts, some other cryptocurrencies introduced new consensus algorithms such as Proof-of-Stake, Directed Acyclic Graph etc.

We have already completed a decade with several thousand cryptocurrency projects. This number will only increase, although some blockchains have already orphaned and almost no one uses them.

Development in crypto is moving forward with high velocity. The beauty of crypto is that any programmer or developer can start inventing something at home on his laptop and one doesn’t need to set up a company or build a factory like in some other industries. The best idea and practical use win. And thanks to open source, one can start where someone else ended up.

Stablecoins as a half-step between crypto and the real world

Governments, central banks and also hi-tech companies will start coming up with their own digital currency projects. In Sweden, this is already planned and more will come. This is an apprehensible trend because digital money will give you more information about transactions and its participants than physical money. So-called fiat money is very anonymous and people can handle with him as they wish if they use it in physical form.

This is related to other legislative restrictions on centralized cryptocurrency exchanges, which will be pushed to stop offering anonymous cryptocurrencies. Here can governments and central banks hit hard and that's why they will. And it is absolutely understandable from their point of view, they just need to keep in control over all the money circulation.

Decentralized finance will play an important role in the next decade. I dare say that, as the previous bull run was driven by ICO tokens on Ethereum, the next bull run will be driven by DeFi. Loans of all kinds, ideally to finance further investment of the crypto portfolios will then make a spiral, which can cause the next peak and also further correction. But those loans are a perfect example of evading the middlemen in the financial sector, which is obviously….a bank.

Loans based on collateral, which may be your cryptocurrency, gold, stocks, house or anything else that can be digitized and without complicated contracts and loan terms set by your bank. That's exactly why DeFi will rule the finances. MakerDAO is already moving to multi collateral, so there is no need to insert only Ethereum as before. Others will come with similar solutions.

Decentralized loans will simply cover the next decade. In addition to the mentioned MakerDAO, there are projects like Nexo, Compound and others that will want to cut their piece of pie from the market. And save your cryptocurrencies and even stablecoins at an interest rate several times higher than a traditional bank offers? This is another possibility to use DeFi.

Last year were established several decentralized exchanges like Nash exchange, Binance DEX, McAfee DEX and some others. As regulators try to regulate the centralized ones, there will be room for more DEX.

More and more people will realize the old truth of “not your keys, not your crypto,” and they will want to have more control over their cryptocurrencies. This also involves the use of decentralized exchanges, where there is no need to deposit funds with a centralized intermediary.

The cryptocurrency industry is constantly evolving. Satoshi Nakamoto came up with bitcoin over a decade ago. New markets are not sufficiently capitalized, liquidity-rich and they are highly volatile. Of course, this also applies to the crypto and individual coins.

Similarly, as it is now possible to estimate halvening, when it will occur, similarly, it will be easier to estimate the movement of cryptocurrency prices led by bitcoin in the future. The longer its history, the better the predictions will be.

Current mathematical models based on only two halvenings will certainly be refined in the future. The smart money has plenty of analytical and computing resources to at least predict the evolution of cryptocurrency cycles, if not the behaviour of the market as a whole and its movement. The manipulation of prices will be also less feasible with increasing liquidity and price.

However, this doesn’t mean that cryptocurrency price fluctuations will not occur within 10 years. Just a correction will not be 90%, but only 50% in my eyes. Similar to the more mature stock and commodity markets. However, this is also associated with lower growths. Thousands of percent of profits per year will probably no longer be possible in the mature cryptocurrency market of the 2030-2040 decade. It is quite likely that future generations will see this "crazy time" as a digital Klondike.

The coming of Web 3.0, which is secure and where data are owned by users is on the agenda for the next decade. Projects like Elastos or Holochain are working on it. There are likely to be more projects with the same goal, who will deliver. There is no need for a single winner. These projects can coexist in mutual harmony. But the Web 3.0 is so complex task, that it will take some more time.

Decentralization of information, web, social networks - Steem, Voice and others

All data will be monetizable in the future. Likewise, the content and creative activity. The blockchain social network Steem and Brave Browser using the Basic Attention Token have already started working on this. And many others will follow up or partially take over their roles, such as the forthcoming social network Voice from Dan Larimer, the creator of BitShares, Steem or EOS. Voice is about to start in February this year unless there will be some unexpected delay.

In the future, the data will belong to you and you will decide how it will be used. They won’t be owned by corporates like Facebook or Google anymore.

Tokenization will also be widely reflected in the gaming industry. It is logical, that in this sector crypto should dominate because it fits the most in here. Just check how many new games are here on Steem blockchain. Drug Wars, Road of Rich, Holybread and others. Also, the partnerships with one of the most promising gaming crypto Enjin is in superlatives - Samsung, Microsoft, Ubisoft, Unity, Hashport, PC Gamer, NGR eSports and many others. Here is also the list of the TOP games using Enjin Coin such as Dissolution, Forgotten Artifacts, War of Crypto, Space Misfits, Age of Rust, The Six Dragons, Forest Knight.

Gaming is just a perfect fit for a blockchain and crypto.