Interview: Jakub Čech | IOTA | Tangle will be winner in scalability over blockchain 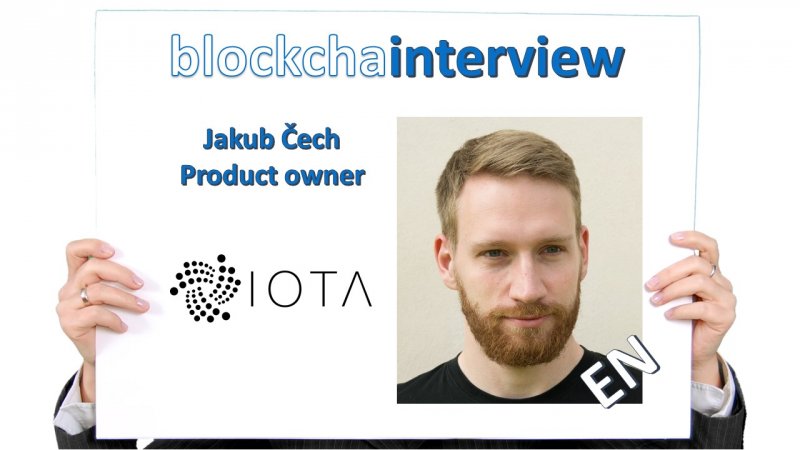 Jakub Čech works for IOTA Foundation for more than one year as a Product owner. We had a chance to do an interview about his role in IF and also about his views on comparison of blockchain and DAG technologies used in cryptocurrencies.

Hi Jakub, how did you get to work at the IOTA Foundation and how long have you been working there?

I’ve been working at the IOTA Foundation (IF) for over a year now. I joined as an employee number 27, and right now there’s I think more than 100 of us.

Before joining the IF, I worked at Microsoft in Oslo. I was interested in the space of distributech ledger technologies in general, but like many of us, I judged many of the projects from an „investor’s“ point of view. Only at the beginning of 2017 did I start digging more into the technical aspects of the different projects. When I stumbled upon IOTA, I really liked the more or less “elegant” approach described in its mathematical model, and by which IOTA attempts to tackle the disadvantages of other technologies in the space. Many technologies approach some of the issues by building layers on top of the original protocol, while IOTA solves some of the challenges, e.g., fees, in the base protocol.

When I started considering different projects to work on, I realized that the technology that the IOTA Foundation is developing looks like the most interesting thing I can be working on right now. Coincidentally they just opened the Product owner position, which was a great fit. I applied, and the whole process was then pretty quick.

What’s your role at the IOTA Foundation?

I work as a Product owner. This is probably a very well known role to anyone who is working in software development. At IF, the role has a little wider breadth. You’re partially in the role of a Technical product owner, product manager, and project manager at the same time. Most of my work consists of establishing what the different engineering teams should work on, release planning, working with stakeholders – usually different companies that are building smething on top of IOTA, with our research department and so on.

My current teams are IRI – the team building the node software that powers our main network – Mainnet. I take care of the client libraries, which are developed in Java, JS, Go, Python and most recently we’ve added Rust to the mix. We’re actively working on a new version of our streaming protocol called Masked authenticated messaging (MAM). I led a project for setting up our new documentation portal and some other bits and pieces here and there. Generally I like to think that my role’s main job is to bring a certain product-driven approach to software development as the adoption of our technology increases.

Why is Tangle better than Blockchain when it comes to IoT and supply chains?

I’ll split it up the answers so I can focus on IoT and supply chains separately. Regarding IoT, IOTA has been built for this specific use case from the ground up. The advantages are many, but I’ll focus on a few in the interest of everyone’s time and attention span. There’s an estimate that some 75 billion IoT devices will exist on the planet by 2025.  No one knows how accurate that prediction is, but one thing is certain, and that’s the fact that this number only keeps on growing. Each of these devices will want to send and receive data, or even monetary value. Many of these devices will be sensor devices that constantly send large amounts of data. For this concept to scale with the number of devices, the cost of sending data has to make sense – sending a transaction cannot be a prohibitive operation for small devices. Thanks to the IOTA protocol being built as feeless, participating in the network is much simpler and there are no inherent costs to sending a transaction. All a device has to do to send a transaction is a single calculation (Proof of work), which costs the device some operating power consumption. Devices can also choose to offload this calculation to larger devices if they want to. This Proof of work concept might also disappear completely in the future. Another advantage over other technologies is that within IoT, communication will often happen outside of established communication protocols, like the ones used for the Internet. Instead, devices will often broadcast and listen to nearby information via approaches Li-Fi. The IOTA Foundation recently published a new approach for this type of communication, called Azimuth, where spam protection no longer relies on concepts like Proof of work, but instead uses device localtion verification.

Another advantage with regards to IoT is the fact that IOTA is working on standardizing the whole protocol. What we want to achieve is a standardized way for IoT devices to communicate and exchange value, regardless of the manufacturer, for example.

Supply chains in general are a very promising application. There are estimates that some $4 trillion are lost annualy from the global economy due to the inefficiencies in global supply chains. This is because a lot of the information exchange in this space happens without transparency and in non-interroperable data silos. This makes it difficult and expensive to track all the information about goods traveling around the globes and exchanging hands. Even less so rely on any real-time tracking. The global standard that the IOTA Foundation is working on establishing would allow all supply chains participants, be it different companies, different sectors of industry, and different countries to participate in the same network, using the same communication protocol. One way by which this is achieved is the permisionless nature of the protocol – this allows anyone to join and communicate on the network.

A big chunk of the supply chain use cases also rely on IoT devices, and all the things that apply there apply here.

IOTA is supposed to reach great scalability and remove the network Coordinator with the Coordicide. Will it not become too difficult to protect the network against double-spend attacks during high througput? Certain adversarial nodes could want to achieve high amounts of reputation to try and achieve that.

The reputation system that is part of Coordicide is just one piece of the puzzle. My first instict when I heard about Mana (that’s what we call the reputation) was similar. Node operators would be motivated to buy nodes to get a better foothold in the network. Mana itself isn’t as important as some people think. This is due to the fact that it’s just one mechanism out of many. We’re also using techniques like celular automata and fast probabilistic consensus. All of these approaches enable the network to very rapidly and reliably reach agreement on the „correct“ state of the network, ruling out any double-spend attempts.

Owning a larger amount of mana won’t do a node much good as the influence is diminishing. We’re mainly using mana to achieve safe, decentralized auto peering solution and make things like temporary nodes a reality.

Will IOTA be more decentralized than cryptocurrencies based on Proof-of-work and Proof-of-stake? For example, more than Bitcoin, which is dependant on several mining pools only. Is a system with multiple trusted nodes the real path to decentralization?

I don’t believe that any system that artificially creates groups of nodes based on an economic incentive that is part of the protocol itself can ever achieve complete, or almost-complete decentralization. The Proof of work system in the IOTA protocol is very different from the one in Bitcoin, for example. Any network participant can realistically perform all the sufficient PoW needed to send a transaction herself without relying on others. Most of the time there is no need to offload PoW to other devices. And there is also no incentive that is part of the protocol that would make you want to perform PoW for others, there’s nothing to mine. Sure, you can charge others to handle their PoW, and they can choose to pay you if it makes sense for them, but you wont be able to realistically exert any influence over the network with that service.

The network will be, in my opininion, functioning in a highly decentralized manner. There will be room for less decentralized clusters that also participate in the network, however. For example, if a company decides to deploy IOTA in their manufacturing process, they might want to create their own sub-network that they control and in which the devices located in their factories participate. And the sub-network will communicate with the main network through gate nodes as necessary. This concept of clustering, its implementation and design are still very much „in progress“, so the details I provide here mainly come from my interpretation.

Is there still a possibility of the 33 % attack? Or is the network large enough that this attack is not feasible anymore? When do you expect this to become irrelevant?

At this point, the network is protected by the network coordinator until it will be fully removed as part of the Coordicide effort. After that it’s the set of mechanisms we touched up on before that will protect the network from 33/51 % and other attacks. What’s coming before Coordicide is finalized are rigorous simulations and a test network, where these mechanisms will be challenged. We plan on motivating participants to try and attack the networks in any way they see fit. If they’re in some way able to successfully attack the network and move mock funds to their address, they will be able to redeem them 1:1 for real tokens.

IOTA has been designed and programmed using the ternary numeral system, which makes the project different from most other computer programs, which work in the binary system. At the same time, IOTA is using the One Time Signatures signing scheme, which should allow it to be resistant to quantum computer attacks. What does one make of that? Is resistance to quantum computing even relevant today, or is it more of a consideration for distant future?

The ternary system is a forward-thinking consideration. It builds on the assumptions that ternary hardware can be significantly more energy efficient than binary hardware, and that you can use existing CMOS technologies to build ternary hardware. We’re working on standardizing a future-proof protocol. At the present, the software handles conversions from binary to trinary and back for specific purposes. But even the representation of trinary values on existing binary hardware can have certain advantages.

When can we expect IOTA support in the Trezor and Ledger hardware wallets?

The current Trinity wallet already supports the Ledger wallet. The support should be extended to more versions of the Ledger wallet in the upcoming Trinity releases. Trezor is being considered but there’s no ETA that I know of at this point.

What’s the IOTA Foundation planning in the near future?

The main focus is on Coordicide right now. It’s a vast project keeping most of the research and engineering departments busy. Engineering will be implementing pieces of Coordicide into existing as well as new software as their research and specification is finishes. You can read more about this in this article. We’ve also just established a $5 mil. grant for Coordicide-related research.

The whole of IF is still significantly growing. We’re working on new partnerships with interested parties. We have existing products running on our main network, Jaguar Land Rover introduced an IOTA in-car wallet. Evrythng is using IOTA for apparel tracking. And much more is coming.

Thank you for interview!