Interview: John McAfee | We all worked hard on McAfeeDex 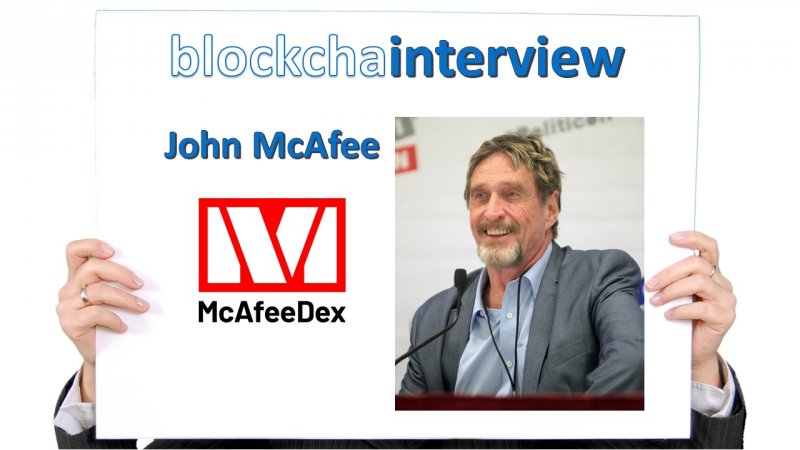 Interview with a veteran over cybersecurity and cryptocurrencies, John McAfee himself! On his new decentralized McAfeeDex exchange are applied the laws of mathematics, so neither Satan will not f_ck with you unless he changes those laws!

We managed to get an important guest for today's interview. His behaviour and expression signify a wise and intelligent old man who speaks passion fully of freedom, decentralization and cryptocurrencies as if they were the most important things in life. And maybe they are, especially for those who really lack freedom.

This is probably our first and the last interview with the US presidential candidate ever so enjoy it.

Thank you, John, for joining our blockchainterview.

What are we talking about today my friend?

Our readers will be interested, where are you at this moment of the interview?

I can’t tell anybody that because of my cryptocurrency activities I’m haunted by almost every government in the world. So, I’ve been many months in hiding, you can see I have behind me a faraday cage and the screen behind me so that no signal goes in and no signal goes out, and in addition we have scramblers everywhere, so even if signal goes out, nothing can come in so there can’t be any communication. We just trying to be safe. I wish I could tell you.

How is your presidency candidacy going at this moment? Do you see any real chances for your election?

The answer is „no chances for me” and I don’t dream to be a president. You know I’m running to make a point. America is having a two-party system, democrats and republicans. I’m in a libertarian party, its third-largest party and we’ve never won an election, not a national one.

Is there anything that can be done for crypto by the president of the US?

This is a technology that runs from the people. Realize, cryptocurrency and blockchain did not come from Apple, or IBM, or Microsoft or Google. None of the technology giants.

We don’t want governments control, that is why I’ve been saying: distributed exchanges, privacy coins, free yourself economically! And you free yourself in every other way. And governments do not want you to be free. It’s your choice.

Use this technology properly or waste the greatest opportunity ever given to the individual spirit!

You´ve been saying for long time, that decentralized exchanges are very important for the future of crypto so you just launched one. McAfeeDex is unique by not collecting customer information and having 0 fees for makers. Why you decide to start it and how long it took from the first idea of making it till the launch? How many people participated on this project?

I’ve been involved in many of the decentralized exchanges projects, but most of them failed. The technology sounds awesome – atomic swaps! Put it in reality, the timeframes are insufferable and can´t work.

And it simply became clear that one of my companies, that is companies I’ve been supporting and advising and working with wants to win this war. And so, I abandoned everything else and this is it. And I put full pressure on these people.

This is the only way; you must get this thing done.

And it’s a hard road, its seriously hard road! And it’s something many people can’t understand, how can you not be responsible?!

Listen, we put it on blockchain. It’s there. I’m sorry. You can punish me to putting it there, but you can’t take it off. So, what am I supposed to do? I mean, I am not god, I can’t just magically change the law of mathematics. So, we can’t pop it off the chain. It can’t be done.

So now, if you are stacked with your world, now, good or bad it whether succeeds or not depends on what we do in the next few months. We got to fix our obvious user interface problems.

And your money totally secure, that much is absolutely sure. We’ve opensourced the smart contracts.

If you deposit money in and you don’t get your exchange, your money comes back. It can’t possibly be changed.

So, you don’t need to trust the person on the other end, it can be Satan himself. And unless Satan can change the laws of the mathematics, he can’t fuck you all.

So, this is the beauty of it all. And it can’t be stopped.

I mean, the decentralization, if you still have centralized portal that can be stopped. No.

They can’t shut it down. What governments gonna do? They wanna regulate? They want you to deregulate? Lose if you wanna pass it its illegal?

Marijuana has been illegal for 75 years and it has not stopped a single weed smoker. So, you think its gonna stop cryptocurrencies? Please, god, wake up America!

What calculation you´ve made to figure out the possible price of Bitcoin to be 2 million USD?

People asking me all the time.

It’s a matter of scarcity of the coin. You realize we have 3 million coin left to mine and there won’t be any new coins! We know for a fact that there gonna be fewer and fewer over time. People forget their keys; this is what’s being happening.

Bitcoin total supply is shrinking dramatically. 7 million coins lost already! Never to be recovered! Because of this beauty mathematic since it can’t be changed, it can’t be recovered. I’m sorry (laughing).

And the stores, they’re lost! So, use your head, people! Bitcoin will forever decrease in size. Until its only 1 Bitcoin left. I mean it’s in all sincerity. Use your heads.

And then run some math, look at the diminishing rate of Bitcoins. The rising acceptance of Bitcoin. And run some simple geometric graphs.

If it’s less than 2 million dollars by the end of 2020, you forgot having at two and two. I mean, it’s simple, please people.

Do you think that then the price of Bitcoin will stabilize in some way and become less volatile? Or can every next halvening and with bigger adoption still make Bitcoin new and new highs? It must stop somewhere, right?

And it’s happening more and more. So, as that rises and as the total supply decreases, good god, people use your heads!

Here is what I say. I think developers make whatever decision they want with open source code. So problem is open-source. I mean if you wanna change it and put your name on it, and change the wallet addresses to some wallet belonging to you, please god, do so! That’s your fundamental right, all right?!

If you make it open source, you can’t complain about what people do with than after.

So, do we need governance? No!

Do you understand what’s happening developing community is that the old pyramidal power structure comes down there to somebodies got to be in control?

And who should it be?

Please god let us forget where we are heading, where we hoping to be. And we open Pandora's box and thank god what popped out was good cause ain't going back in again, that’s for sure.

Do you think that the blockchain revolution can bring something bigger than the transferring value over the world without the middleman, which is already very revolutionary thing? Like redefining the values as such? For example, to define how to govern, how to give a mandate so someone and how to dismiss it quickly and democratically?

The blockchain is a tool. Like any tool. It happens to be a programmable mathematical function that is a tool.

We don’t need to worry about how it's controlled, once done with it, because that’s out of our control.

No one can be arrogant enough to think that they are going to end crime and suffering and poverty. And the world problems have been with us 50 000 years.

That we gonna end that and prevent that? Do you understand the insane arrogance of that attitude?

No, we built it, we put it out there, use it for what you want.  Do not restrict technology by its potential uses. Don’t let what might be influenced what is.

Thank you for your time

And thank you, my friend, for your time, I enjoyed it. Bye-bye!