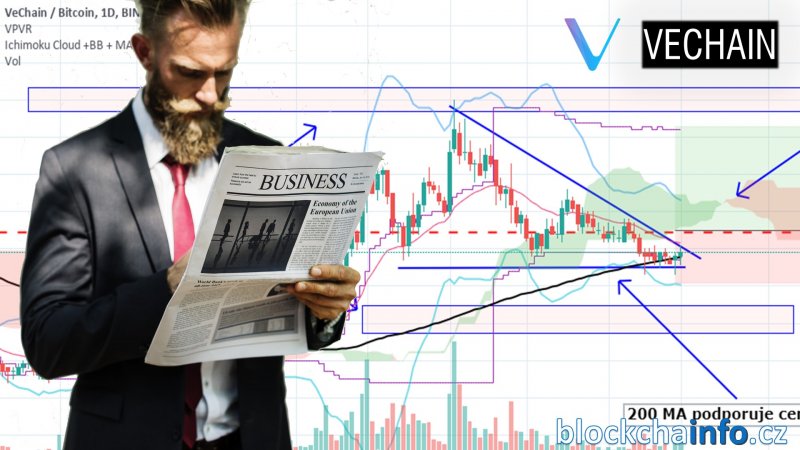 VeChain Thor is one of the altcoins, which did not move significantly like some other alts in the last few days. But there are signals, that this might change and VET could move up in the next few days.

Some indicators on the VET / BTC chart could lead to its growth. The risk-reward ratio is 1:2, which is very decent. After the crazy growth of some altcoins from the last few days, it is VeChain Thor who has not yet recorded his gains and according to technical analysis should be next.

While some of the mid-cap altcoins have already moved, VeChain remains still. This is likely to change over the next few days. The VET / BTC pair has dropped volatility and is completing the triangle.

The bottom price is supported by a moving average of 200 day MA. The Ichimoku cloud also created VeChain's way up.

As input signal, I consider impulse motion to and through Point of Control (red dashed line). Impulsive movement can be identified either by increased volumes or by large candles on lower timeframes.

Since the nearest low volume zone below the current price is too far away (the blue horizontal lines on the right of the graph), I will put the stoploss just below the triangle.

The overall position points to the closest low volume zone above the current price, creating a sympathetic position with an RRR of 1:2 when the position is opened exactly at Point of Control. These zones are not drawn based on the displayed profile but on a much larger sample; in the picture mainly because of Point of Control, which activates the position.